This skin includes FIVE new tones(a drow tone being the 5th)... = aswell as added head tattoo, and some extra bit underwear/undershirt so you can run around naked if you REALLLY want to lol ;) ....I've gone insane. 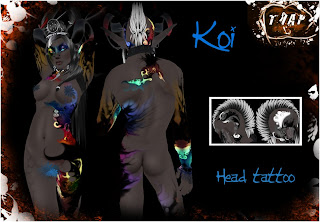 This skin is somewhat of a special case due to it's cult-like popularity after I took it down from the harajukubox skin fair ;). I had originally only meant to release this as a limited edition skin with the first 4 colors and three tones offered at the harajukubox skin fair quite a few months back.
Though due to constant interest in this skin by those who had missed the short 2 or 3 day event (I don't remember) I decided to put this skin for sale again , reworked, and touched up in some areas, also with aditional parts, such as a head tattoo and clothing layers for modesty bits.
All this EXCLUDING the original 4 colors after creating several posts on flickr and in my update group and blog for anyone to disagree with this idea..and not a single person did over the past month roughly up until now. I appreciate everyone who participated in that vote, it was fun to finally make all the colors I really would have originally wished to make on these skins :)
http://slurl.com/secondlife/Carnivale/133/82/32
http://slurl.com/secondlife/The%20Twilight/52/171/44
Posted by Selos at 2:17 AM

Awesome! I'm never ever ever taking these skins off! And the nudie covers! Fantastic.